Friday, September 29 we went to the Shaolin Temple and Buddha Forest at the base of the mountain and then on Saturday I took the bus back to Luoyang and Lin headed for Shanghai. I’m reminded of the old TV series with Keith Carradine about the Shaolin Temple and Kung Fu. How he traveled the old west rescuing people from trouble and things they had gotten themselves into. Flashbacks of his time back in China at the Shaolin Temple and his mentor referring to him as “grasshopper”. We were walking in front 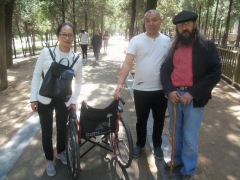 of the temple and I saw someone with one of the wheelchairs our sister city committee had donated to Qufu back in 2007. Christiane Francois and I came to Qufu to facilitate donating two hundred wheelchairs from The Wheelchair Foundation and the Boynton Beach Sister City Committee. It was quite a surprise. The first wheelchair I had seen in more than ten years. It was in great

condition too. My photographer friend (Lin) and I at the entrance.

Shaolin Temple, in the region of Songshan Mountain in Dengfeng, Henan Province, is reputed to be ‘the Number One Temple under Heaven’. Shaolin Temple history can date back to Northern Wei Dynasty (386 – 534), and it played an important role on the development of the Buddhism in China. Upon entering you first see Shanmen Hall. Hung on its top is a tablet reading ‘Shaolin Temple’. The tablet was inscribed by the Emperor Kangxi (1622 – 1723) during the Qing Dynasty (1644 – 1911). Under the stairs of the hall crouches two stone lions made in the Ming Dynasty (1368-1644). The hall enshrines the Maitreya Buddha. Two sides of the corridor behind the hall’s gate are paved with inscriptions on stone steles made during several different dynasties. Sometimes the less said the better to let the reader use pictures and their own imagination to take you there.

visited the temple. The scenery adjacent to the temple makes it an ideal place for practicing the Chinese Shaolin Kung Fu. Shaolin monks have been practicing Kung Fu for over 1,500 years. The system was invented to teach the monks basic methods to improve their health and defend themselves. The martial art performance shows (which I attended), illustrate the true Chinese Shaolin Temple Kung Fu. For example, Tong Zi Gong, performed by teenagers, is a kind of martial art to train one’s flexibility and strength. Shaolin Kung Fu has a great tradition in China. Today, there are more than 50,000 students here in facilities across from the Shaolin Temple.

The Shaolin Temple has two main legacies: Chan, which refers to Chan Buddhism, the religion of Shaolin, and Quan, which refers to the martial arts of Shaolin. In Shaolin, these are not separate disciplines and monks have always pursued the philosophy of the unification of Chan and Quan. In a deeper point of view, Quan is considered part of Chan. As late Shaolin monk Suxi said in the last moments of his life, “Shaolin is Chan, not Quan.”

On the Quan (martial) side, the contents are abundant. A usual classification of contents are:

In practice, beyond the martial arts aspects of Shaolin, was that the essence of enlightenment came to be identified with the interaction between masters and students. It was through Chan Buddhism that whatever insight, or dhyana, would occur as a series of cultivated states of mind which leads to a “state of perfect equanimity and awareness,” commonly translated as meditation, that would serve as one’s verification. In effect, enlightenment came to be understood not so much as an insight, but as a way of acting in the world with other people present. Shaolin was the result of both purification of both body and mind. (some of the above from Wikipedia)

The Pagoda Forest, next to the Shaolin Temple, serves as a graveyard for Buddhist dignitaries through the ages. On average, the pagodas are about 50 feet high. The layer and the shape of a pagoda depend on many factors, such as one’s status, attainment and prestige during his lifetime. The Pagoda Forest here is the largest of China’s pagoda complexes.

Outside the Shaolin Temple to the northwest, are two monasteries, named the

Ancestor’s Monastery and the Second Ancestor’s Monastery. The first monastery is built by a Dharma’s disciple to commemorate Dharma’s nine years of meditation in a cave. It has a big hall supported by 16 stone pillars on whose shafts are exquisitely carved warriors, dancing dragons and phoenixes. We did not have much time here as we had to return to the hostel. We had intended to climb the second adjacent mountain the following day, but the tram was not working and we would not have time to walk up and back down before returning to Luoyang.