Is it time to create a new story and even more important – what story are we telling ourselves that we stand in?

A dear friend in Florida who knows me well asked me the following… as if bravely asking a historian, “Is it time to create a new story?” She was mulling over a book by Charles Eisenstein, The More Beautiful World We Know is Possible, that encourages us to ask the question, “What story do I stand in?”

Stele of the Immortals  – Qufu

Very often Taoism speaks of the “obstacle of the writings”: when we get caught up trying to find truth in the words themselves, rather than traveling through the words to the place whence they arose. In today’s world of social media, we often have to ask ourselves… where does truth lie? That truth often shines like a backlight through the words. Where then do we find the Truth? For myself, it has always been this way. Initially I thought as a writer, how could these words that I have written be my own. That perhaps the words were in effect passing through me in order to match that which mirrors my soul.  That all writing if true is autobiographical. The who I am yet to become, or perhaps to recall who I have always been. As if the transformation was underway and by writing the words they would become me. Scary thought… Then as if prompted I wrote. “what you write is who you are to become.” That my friends, will get your attention. As if in remembering the storyteller I have always been I would say… ah the stories I would or could tell. As if I was catching my breath and the words would simply be there.

Keeping to Lao Tzu and the Tao Te Ching, when I wrote Thoughts on becoming a Sage, The Guidebook for leading a virtuous Life in May/June 2000, we had traveled to Qufu about six months earlier for the first time. Of course, Qufu is the home of Confucius.

I had no idea that Qufu would be like a moth to a flame to me now that I have made almost fifty trips and am planning to return next Spring. The first day we were there it hit me. I had been here before. Qufu is the home of the Yellow Emperor who lived in 2700 BC, Ji Dan, the Duke of Zhou in 900 BC and Confucius in 450 BC. In Chinese history these three would come to be known as dragons and become immortal. Over time they have served to help make my own way clear.

Dan with students in Qufu

After all those trips and later living and teaching at the school founded by the descendants of Confucius, adjacent to the Confucius Temple and Mansion in Qufu a little over ten years later, well there was more here than meets the eye.

It gave real meaning to what I had written in my book mentioned above and to the verses 7, 8, and 9 below. And further defining what may be my purpose. My friends in Qufu gave me the name Kongdan. Kong is the family name of Confucius… and of course my first name is Dan.

The idea of creating a new story for ourselves can appear to be presumptuous. As if bringing an end to a myth of who we thought we were.  Perhaps it is simply updating an 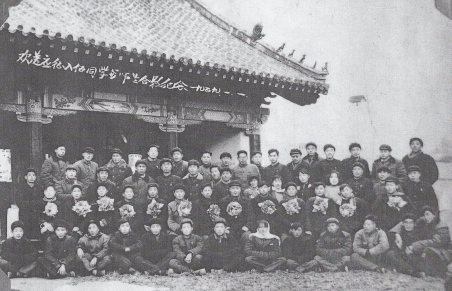 Picture of descendants of the four families responsible for maintaining Confucian ideals at the school in Qufu where I taught in 2011-13. Picture above was taken in 1902. The four families were of Mencius, Si Zi, Yan Hui and Zeng Zi. The school was opened to the public in 1912 after the fall of the last Emperor and forming of the Republic of China.

old story we have always known, but simply forgotten that needed updating that is what ultimately empowers us. Even more so when we gain a sense of purpose and direction that gives meaning to the story we are here now to stand in as our original self. I think this is what Joseph Campbell meant when he referred to “finding our bliss”.

The first paragraph above speaks to the obstacle of the writings, especially when we get caught up trying to find truth and meaning behind the words themselves that reflect, or define us.

Below is the continuation of my book Thoughts on becoming a Sage, The Guidebook for leading a virtuous Life, as if following the guideposts laid down by Lao Tzu’s Tao Te Ching. The commentary, as before, is from Red Pine’s Lao Tzu’s Taoteching. Ultimately, the question becomes… have we found and are we living in our own story? The following three verses were intended to keep me accountable to mine and to my peers, the dragons.

Keeping to Heaven’s promise through finding the immortality found on earth.  Giving consent without expecting reward. Remaining humble – the only thing the sage seeking is virtue.

Forever creating an environment emulating and promoting the journey you must take to selflessness.  As you have been given an opportunity to remain immortal simply by living for today.  Truly living through grace.

Becoming adept at remaining in the background while setting the table for all who will come to eat their fill. Constantly reminded of your never-ending destiny as endeavors continue the process of your letting go.

As you remain content with who and where you find yourself. Living, dying and subject to change each moment.  As you travel with no sense of age or time.

The paradox that comes to greet the Sage

Reminded again and again that you can only move ahead by staying behind with a cheerful countenance with virtue to be shared by all. The utmost paradox living brings forth to greet you each day. ##

Sung Ch’ang-Hsing says, “Heaven and Earth help creatures fulfill there needs by not having any needs of their own. Can the sage do otherwise? By following the Way of Heaven and Earth, the sage is revered by all and harmed by none. Hence, he too, lives long.”

Jen Fa-Jung says, “The sage does not purposely seek long life but achieves it through selflessness.”

Wang P’ang says, “Although the sage is a sage, he looks the same as others. But because he embodies the Way of Heaven and doesn’t fight, he alone differs from everyone else. The sage is selfless because he no longer has a self.”.

Travel as if you were water taking on every shape that comes your way as you give life to everything and everyone you touch and meet.

The World of the Dragons       Wall painting in Chengdu

Conveying the eternal spring that comes forth from you each day as if you were just passing by.

Being content to remain at the bottom of all things – free from blame.  Avoiding competition while maligning no one.

Choosing humility and that which no one else chooses to do.

Travel like water as if approaching the unattainable Tao.  Remaining clear and deep. Yet constantly emptying to give life to others. Reflecting but remaining pure as you cleanse all that you touch. Having no purpose of your own, assisting truth and helping others to find their natural way as if you were all encompassing, but not really here. ##

Ho-Shang Kung says, “The best people have a nature like that of water. They’re like mist or dew in the sky, like a stream or a spring on land. Most people hate moist or muddy places, places where water alone dwells. The nature of water is like the Tao; empty, clear, and deep. As water empties it gives life to others. It reflects without becoming impure, and there is nothing it cannot wash clean. Water can take any shape, and it is never out of touch with the seasons. How could anyone malign with such qualities as this.

Sung Ch’ang-Hsing says, “Those who free themselves from care stay low and avoid heights. Those whose minds are empty can plumb the depths. Those who help others without expecting any reward are truly kind. Those whose mouths agree with their minds speak the truth. Those who make demands of themselves as well as others establish peace.

Verse 9 – Maintaining a Reservoir of Enthusiasm

Be careful of what you cultivate and prepared to let go of what fills you.

Know your obstacles before you enter the room or gate to further knowledge and understanding. As if you were a waterfall, only releasing that which does not define your true motives and destination.

Since fullness leads to emptiness – remain empty prepared to become full again and again. Since sharpness leads to becoming dull, avoid zeal and maintain a reservoir of enthusiasm. Since riches lead to worry and excess avoid calling attention to yourself and maintain value within so that it cannot be taken away. When your task is done treat it as though it were nothing and move on to be reminded of the knowledge of ten thousand things.

As you let your enthusiasm carry the day. ##

Liu Shih-Li says, “Since fullness always leads to emptiness, avoid satisfaction; since sharpness leads to dullness, avoid zeal; since gold and jade always lead to worry, avoid greed; since wealth and honor encourage excess, avoid pride; since success and fame bring danger, know when to stop and where lies the mean. You don’t have to live in the mountains and forests or cut yourself off from human affairs to enter the Way. Success and fame, wealth and honor are all encouragements to practice.

Wand Chen says, “To retire doesn’t mean to abdicate your position; rather, when your task is done treat it as if it were nothing.”

Ssu-Ma Ch’ien says, “when Confucius asked about the ceremonies of the ancients, Lao Tzu sad, ‘I have heard that the clever merchant hides his wealth so his store looks empty and that the superior man acts dumb to avoid calling attention to himself. I advise you to get rid of your excessive pride and ambition. They won’t do you any good. This is all I have to say to you’”

This is a very famous quote of what was considered the only meeting what may have occurred between Confucius and Lao Tzu. Lao Tzu is considered to have felt Confucius was to “full of himself and very ambitious”. His bringing him down a notch or two, was a very significant event in Chinese history. Coming from Ssu-ma Ch’ien the storied historian of ancient China gave it credence.

When I wrote the above verses of my own version of the Tao Te Ching, I went back and tried to compare what I had written over a few days in May 2000 with other translations, and I was happy with what I had written. I felt I had captured the essence of what Lao Tzu intended to say.  It was as I mentioned in the first paragraph above, as if the conveyor of basic truths that were simply passing through me and whatever story I had been telling myself or standing in was to change.